A former student of mine, Sandy Wardenburg, had the insight to place this quotation at my place-setting for her magnificent wedding dinner when she and another former student, Mike Waggett, were wed. She was right about this advice, and, of course, right to marry Mike, an outstanding pilot, military leader, and educator.

So I thought of Sandy’s insight when I saw the retweet from Leif Babin announcing the Fox News special War Stories: Fighting ISIS, scheduled to air March 25, 2016. I can’t tell you how to beat ISIS, but I can tell you without the slightest doubt how to lose.

My mother-in-law, now deceased, gifted me a book before I deployed to Vietnam: Le Manifest du Camp No. 1. My mother-in-law was French. She also gifted me several other books on the French experience in Vietnam. So before I deployed and monsoon nights in my hutch, I was reading about how the French lost their war in Vietnam, a part of what was known as French Indochina at the time. Then I would hear and read the press releases from the U.S. about our own war. It was like re-reading the history of the French debacle. Two things became clear to me: 1) U.S. primary policy makers seemed oblivious to the lessons from the French defeat; 2) We would lose. We did.

Among the books I read at the time, Le Manifeste du Camp No. 1, by Major Jean Pouget, struck me as the most insightful. As I look at my well worn copy, I see from my hand-written note that I finished reading Major Pouget’s book on June 13, 1970, more than half way through my one-year tour in Nam. When I read Leif Babin’s retweet of the Fox News announcement, the memories came flooding back, in particular the key insights and lessons Major Pouget had gleaned  from the French politico-military defeat in Indochina.

To lose: Misunderstand the nature of the conflict.

Jean Pouget characterized the nature of the French conflict in Vietnam as a fight between archangels:

Justice was a cause worthy of sacrifice and they, the officer prisoners of Camp No. 1, were among those who accept to die for a great and noble cause. They were ready to march in the ranks of her army, to fight for Justice as they had for Liberty.

Now though, Justice and Liberty were dividing the world, and the two archangels were engaged in a fight to the death. The battle of the archangels made the entire earth tremble, and everyone had to choose a side. . . . Now they had to choose between two archangels of light, both princes of Men and lieutenants of God. (Pouget, 1969, Le Manifeste du Camp No. 1, p. 259, Arthème Fayard, Paris. Translation from the French by A. Allen Rowe)

ISIS clearly is a different enemy and the theater of battle not at all French Indochina. However, it appears to me that our issues do indeed go well beyond military strategy and tactics. Can we continue as a nation to flaunt our self-indulgence and hope for victory? I have raised children. They always knew when I was wrong. And, they still do. What do the children of the world see when they look at the U.S. today?

Also Paul of Tarsus might agree with Major Pouget: Some major forces are involved:

To lose: Continue with business as usual

“We can wage this war with business men and mercenaries, but to win it we need saints and heroes.” He recalled the words of Major Julien, his battalion commander who was killed the year before. Julien lived like a saint because he had prepared himself to die like a hero. . . . “We must purify and harden ourselves . . . and become revolutionaries. We must reform our outdated world, do away with injustice, crush the arbitrary tyranny of bureaucracy, and build a promise of society so beautiful that its construction will become an exalting task for all humanity” (Pouget, 1969, Le Manifeste du Camp No. 1, pp. 18-19, Arthème Fayard, Paris. Translation from the French by A. Allen Rowe)

Some politicians try to lull us into complacency. There is nothing to be complacent about. Last week Brussels. Where next?

To lose: Fail to understand the power of an ideologically committed foe

One of the books I read, the title of which I do not recall, explained how the French lost the battle which lead to their loss of the war. They called upon artillery experts from both the U.S. and Britain to evaluate the situation before taking their stand on the plain at Dien Bien Phu. The experts said that the enemy would never be able to install heavy artillery on the steep hillsides surrounding the plain, and light artillery would be out of range. Of course,  history proved the experts wrong. Under the leadership of General Vo Nguyen Giap, the Viet Minh drug heavy artillery up the steep hill sides, set up the pieces in natural lime stone caves and proceeded to blast the French forces into surrender. Of course, Giap went on to defeat the U.S. Forces as well. We ere gravely if we assume, as has been claimed in Washington, that in ISIS we face a bunch of thugs. These are vicious combatants with leaders whose ego and religious zeal drive them to seek victory at any cost.

On November 16, 2014 U.S. Citizen Peter Kassig, aide worker and former Army Ranger, was beheaded in a gruesome ceremony along with some 18 other hostages. To me this was not just another act of violence far across the world. This was a watershed date.

The men who carried out this execution promised to bring such acts of vengeance to the streets of America. What spirits motivated these executioners? Would they spare your son or daughter, your father or mother, your brother or sister? Or you? What stands between them and our homes?

The preceding quotation is from the preface of my short Kindle book, Always Eat to Win. Just the thought of Kassig’s execution makes me nauseous. The fact that our nation scarcely flinched at this heinous crime saddens me beyond measure. Who, though, saw this as a milestone event? Did you?

To Lose: Do not take ownership.

Pass the buck along. Kick the can down the road. Blame, blame, blame.

To Win: Own the Threat

The best manual for victory: Extreme Ownership by Jocko Willink and Leif Babin. 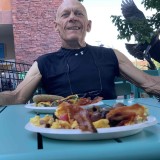